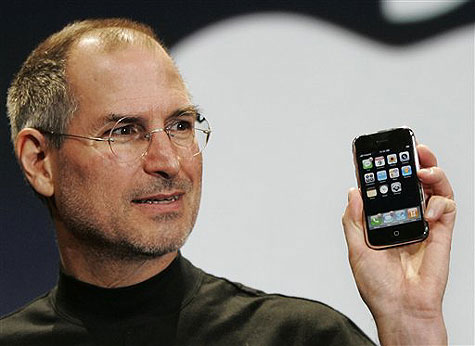 Welcome to the latest installment of Ask the MACist and my special Macworld Expo 2007 coverage. After many hours in the car last night and a long stop at the grapevine because of an accident, I made it back to LA around 2AM this morning. It's good to be home. San Francisco is a nice place to visit but LA is my home. Although, as a Mac fan, it would be cool to live near Cupertino and Apple HQ so I could visit frequently but I guess that would be one of the few reasons for me to live up there.

Anyway, this isn't an "LA vs. SF" post so I should get back to what I know more about — tech, Apple and Macs, Macs, Macs. Now that Macworld Expo is basically over I thought I would share some of my observations about the "big announcement" from Apple and the show in general. Let's start with the fun part first: the announcement of the iPhone.

The iPhone is Apple's answer to what it thinks is the need for a device that does, as Steve Jobs put it in the keynote, three important things: a phone, music and internet device all in one. On the surface, that all sounds great and in person, the iPhone is an impressive piece of technology. And, of course, as a certified tech junkie, I want one really bad. That said, some thing about the iPhone are somewhat troubling to me after further examination.

First is Apple's deal with Cingular. The iPhone will only be available from Cingular and as of now, only with a new two-year contract. If you are a T-Mobile customer or with Sprint or Verizon, you're out of luck. Plus, according to reports, there will not even be an unlocked GSM version of the phone so those of us on other GSM networks like T-Mobile can buy one and use it. Plus, there are certain features of the iPhone, the most notable being the new random access voicemail that will only be available if you use the phone with Cingular's network.

So, right out of the gate, Apple is making enemies out of any of the other wireless carriers as well as alienating millions of potential customers who are not on Cingular. Sure, many people will switch to Cingular to get an iPhone but many more will be angry about the need to switch and probably won’t do it – maybe even to spite Apple a little. I haven’t taken a formal survey or anything but most of the people I know who use Cingular seem ok with it. That said, I used to be a Cingular customer and switched from them to T-Mobile mostly for the lower priced data and minute plans. There’s no word from Cingular yet on what data and minute plans will be offered for the iPhone but I feel strongly they will be more than T-Mobile’s

Now, let’s look at a few more things about the iPhone that bother me. First, the battery, like the iPods, is not user replicable. So, in eighteen months when your iPhone battery begins to die are you supposed to throw your iPhone away? Apple isn’t saying anything at the moment but as of now, you can’t just take the old battery out and pop in a new one and I think that’s a mistake. Having an extra battery around for your cell phone is something that most people, including me, do. To not offer that with the iPhone is a mistake.

Also, EDGE is another problem that I have with the iPhone. It’s now 2007 and EDGE is so last year. With Cingular getting set up to move to an even faster network in the future it seems like EDGE is a compromise with the iPhone that shouldn’t have been made. The inclusion of wi-fi is a nice thing but you can’t always find a free wi-fi hotspot when you need one so most people surfing the web with iPhone’s version of Safari will be stuck using the EDGE network. Consequently, those much-hyped “full HTML” web pages on the iPhone are going to take a long time to load. I have EDGE on my Treo 680 and while bearable speed-wise, I wouldn't exactly call it fast. Certainly not something I would want to use for anything serious and for prolonged periods of time.

My guess is that Apple and Cingular have something else in mind for the iPhone’s data connection and will announce it soon enough. After all, the device isn’t supposed to ship for 6 months so in that time, anything can happen. Also, I think we’ll see some other changes to the iPhone specs including larger hard drives by the time it actually ships. In six months, surely they will have larger flash drives than 8 GB available and can include them in the iPhone. Who knows, we may even see replacable batteries and unlocked version by then too? Let's hope so.

Lastly, I want to mention the fact that the iPhone, while it does run a version of OSX, will be locked down with ability for third-parties to make software for it and no way for people to install it. I think that’s a mistake also. Apple likes to control everything and their products are great because of this. However, Macs could not exist without third-party developers making software for them. The same, I think, goes for the iPhone. Why not let people install applications, widgets or whatever on the iPhone and turn it into more of a mobile Macintosh? I think that would make the iPhone far more attractive.

Plus, if you were able to install Skype on the iPhone that would give you one heck of a mobile communications device. Although, I really can’t see Cingular liking that one too much because it pretty much cuts them out of things. Really, Steve Job’s reason for making the iPhone a “closed” device is pretty lame and also, basically impossible. He says: “You don’t want your phone to be an open platform,” meaning that anyone can write applications for it and potentially gum up the provider's network, says Jobs. “You need it to work when you need it to work. Cingular doesn’t want to see their West Coast network go down because some application messed up.”

Maybe Steve Jobs knows more about cellular technology than I do but I have a very hard time with his reasoning here. Really, I think its just a case of Apple being Apple and wanting ultimate control over their product. I don’t need BS reasons for things. I would be more impressed if Jobs just admitted he didn’t want to open up the iPhone because he didn’t want to take the chance on other people messing up the “experience” of it with bad applications. I wouldn’t like it but at least it would be an honest answer. This excuse, on the other hand, is just lame.

As for the Macworld Expo in general I can say that, as always, its great fun to go to San Francisco and see all the latest Mac and mac-related gear the expo has to offer. It’s a good time and I get to see some old friends and occasionally make some new ones. That said, do I really learn anything at the Expo? No, not really. Unfortunately, as things go on it seems the need for a giant trade show like Macworld gets less and less. For the most part, I can find out about all of these products and services on the Internet and try most of them out, especially in the case of software, as a demo before I buy.

So, I don’t really learn all that much from going to Macworld that I couldn’t learn in some other way. You may ask yourself at this moment why, if I don’t learn anything, do I go? The answer is simple: the people. I go so I can get together with a great community of people from all different parts of the world, every different race, creed, sex, religion and career, all united by one simple thing: their love and devotion to well-designed, easy to use, elegant and exciting products made by a company called Apple.

The people like software vendors, iPod accessory makes, photographers, IT pros, writers, flash artists, video makers, musicians, moms, dads, kids, grandmothers and everyone in between all help make the experience of Macworld the, dare I say, special thing that it is. I know I’m sometimes critical of Steve Jobs and Apple but five minutes watching him speak live during a keynote, the crowd pumped and hanging on his every word is enough to keep me coming back year after year. If you’ve been there, you know what I mean. If not, I highly recommend you go once in your life. See you next year!

About Chris Ullrich: Chris is the technology editor at LAist as well as a frequent contributor to other sites like Comic Book Resources and Cinematical. He also consults with clients in entertainment and related industries about how technology can best help them exceed their goals.