10 Reasons Why LA is Not Chicago

10) While LA's Silversun Pickups can't seem to shed the Smashing Pumpkins comparisons despite releasing a record — "Carnavas" -– that tops anything Billy Corgan's done since Siamese Dream, the only think rockin' in Chicago these days is the back seat of R. Kelly's stretch Benz. 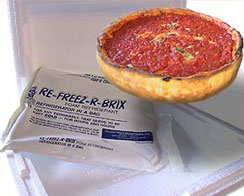 9) Ex-Illinois Governor George Ryan may be headed to jail for his activities as a corrupt, crony-lovin' highway-to-nowhere-building Republican, but he at least had the foresight to impose a moratorium on executions to ensure some love and protection in the clink. Will Arnold follow suit (as far as striking the CA death penalty, that is)?

8) Avocados grow on trees, but pizza does not. And nowhere in LA does the imitation Chi-town style deep dish pizzas come close to the real thing (But UPS comes thru — thanks, Brown).
(photo courtesy Piero's Pizza.)

6) Smoking's been banned in California restaurants for nearly a decade, and it's been ten years since prop 215 legalized the use of medical marijuana. In Chicago, you can still smoke "at the bar," but you can't eat foie gras and now trans fats may officially be on the outs.

4) Chicago shored up its not-much-better-than-LA public bus system by widening the seats on its buses to accommodate heavier, uhh.... clothing. For drivers, cell phone use (sans headset) has been banned since mid 2005... coming mid '08 to the state of CA, and trust me... I feel no safer trying to send text messages when I'm afraid to put the phone to my ear.

3) Chicago's Millennium Park forever changed the city's landscape even if it opened 5 years late and hundreds of millions of dollars over budget.

If the same happens with Grand Ave. Intervention and Villaraigosa's "greenification" plans… it will be well worth it. Same may be true for Tony V's LAUSD reform ambitions. Chicago Public Schools aren't perfect, but are considerably better off than they were prior to Mayor Daley's takeover (generally speaking).

2) Chicago may be an island amid a flat desert of soybean and corn farms compared to Los Angeles — a Mediterranean-like wonder on the Pacific with its varied climate zones and dramatic topography. But Chicago does have beaches, and by late summer Lake Michigan's water temperature is often warmer than the Malibu shores. But both cities suffer from frequent beach closures due to such unnatural nasties as E. coli, sewage, and bad pipes (yeah, and Vince Vaughn singing "Take Me Out to the Ballgame" — he's no Harry).

1) Got wheels? Nobody walks in Chicago either.