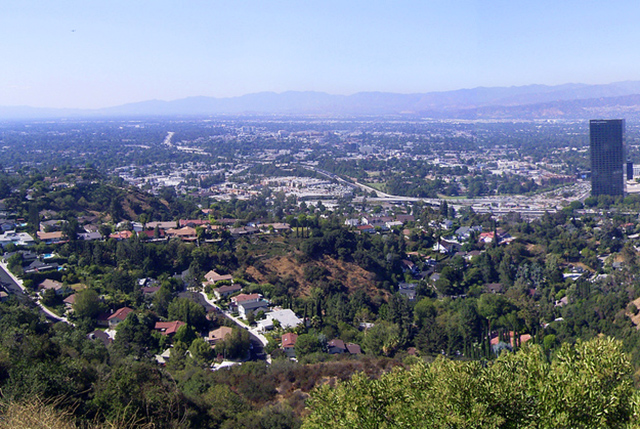 Even though I call LA home, I didn't always live here. Over the years, I've spent time in various other parts of Southern California. Encinitas, Del Mar, San Diego and Fullerton are all places I once lived. Actually, I still think of Encinitas as my other home but as this is LAist and not Encinitasist, that’s not really relevant at the moment.

When I first started coming to LA in the early 90s it was mostly for work. I commuted from Fullerton (aka “The O.C.”) where I lived after finishing college so I could try my hand in the entertainment industry. Even though the commute was "technically" only about 30 miles or so, it took way too long to do and would add at least another 2.5 to 3 hours onto an already very long workday.

So, I decided it was time to move to LA proper. Maybe it's because I had come to the Valley before to meet friends or stay with friends when I was working, or maybe it was just random or some other thing I can't put my finger on, but for some reason, I decided to make the Valley my new home in LA. Over the years, I'm more and more happy I made that decision and am convinced it was the right one.

Sure, it might be cool to live in Beverly Hills, Santa Monica or someplace like them, but in my travels from one end of LA to the other, I'm always happiest when I get back over the hill and into the comforting warmth of my home in the Valley. But, as this is supposed to be a list of my reasons for preferring the Valley and perhaps less of an essay on the subject (if that's possible), following are some of the top reasons I prefer living North of the mountains and East of the 405.

Parking -- It seems that no matter where I go once I'm over the hill on the Westside I almost always have trouble finding a place to park. Whether it's a metered spot in Westwood or a lot with an empty space in Beverly Hills, I'm constantly reminded that there are way too many people looking to park their super-sized SUV in the same spot as me.

Conversely, I can almost always find a place to leave my Prius when I'm in the Valley. I don't know exactly why but maybe its that the Valley just has more room or the people planning it in the beginning thought more about where to park everyone. Whatever the reason, finding a parking spot is almost always easier. And for that, I'm very thankful. Leaving the house is stressful enough without having to fight for a place to park with a teenager driving a Hummer.

Freeways -- Let's face it, LA may not have the worst traffic or the worst drivers of any city in this United States but it comes pretty darn close. For the record, I've found the traffic in Seattle to be the worst I've experienced and the drivers in Miami to be at the bottom of my "best drivers" list. So, living in LA, if I had my way I would never have to venture on freeways like the 101 or the 405 to go anywhere, especially to the Westside.

Yes, I could use Coldwater Canyon or Laurel Canyon to leave the Valley and go to Westwood or Hollywood but really, why would I want to? Those streets can be every bit as congested and annoying as the freeways and in many cases, can actually be more stressful. At least on the freeways you can see other people around you having the same problem and can often see a faint light at the end of the tunnel in the distance.

Crawling along on Coldwater, heading North at 4:30P on a Thursday all you get is cars in front and behind and houses, trees and a bunch of of other things pressing in on the sides around you. Or, how about heading East on Sunset Blvd. towards the 405 at 5:30 on a Tuesday? Really, not very fun at all and something I consider pretty close to what Hell must be like. All of this can be solved, of course, if I just stay in the Valley. That way, I don't have to experience any of it and could live my entire life without ever having to venture back onto the 405 or 101. Well, I can dream, can't I?

Attitude -- Perhaps its because many people who live on the Westside have a lot of money or are very successful, but whatever the reason, they seem to have a pretty big attitude problem. No matter if you're walking on Rodeo, driving on little Santa Monica or taking your dog to Runyon Canyon park, the, shall we call it, "sense of entitlement" vigorously permeates the air.

I cannot count the number of time I have been cut off by a Mercedes driving jackass on Wilshire near Beverly or had my Valley disparaged by someone with a comment like: "Man, I always get lost in the Valley" or "There are no good ________ in the Valley. For really good ______ you need to go to (insert trendy Westside neighborhood name here). I don't know where those people get off but the Valley has tons of great ________ and all sorts of wonderful ________ sure to please a variety of tastes.

Anyway, I'll get to that kind of stuff shortly. Getting back to the 'tude for a minute, I just wonder where it comes from. Is it all the money or is it the stress of show biz or something else? If anyone has a guess, I would love to hear it. No matter the cause or reasons, the 'tude is real and taints many of my trips to that part of town.

Food, Drink and Entertainment -- Continuing from above, it bothers me when people say there's no good ________ in the Valley. We have food, drink, clubs, bars, shops and everything else you could want in a community. Actually, you could spend most of your time in a short stretch of Ventura Blvd. between Colfax and Van Nuys Blvd. and get almost everything you could ever want. Restaurants like Great India Café, Mezzomondo, La La's, Casa Vega, Good Earth, Loggia, Vegan Plate, Jinky's and countless others cater to almost every taste. Heck, we even have our very own Pink Berry -- so take that West Hollywood.

Plus, bars like Mexicali, Clear, Firefly, Senior Fred and many others take care of your cocktail desires and provide a trendy yet relaxed atmosphere to spend you hard-earned drinking money. And, if you can't find something to wear at The Gap, Urban Outfitters, Lucky Brand Jeans or any one of the dozens of other shops in the area, I submit you're just not trying hard enough.

That "small town" feeling -- Even though the Valley is clearly a major part of the sprawling metropolis that is LA, it still feels like a small town to me in many ways. I suspect some of the main reasons for this feeling are the lack of any really tall buildings and the general sprawl of the whole place. We have a lot of room to move around but still have quite a few people and things close at hand.

This combination serves to give The Valley the feeling of community that it has. And that community feeling is something I've always acquainted with small towns - especially as I grew up in a pretty small one myself. I don't get that feeling at all when I'm on the Westside. There, it seems like everyone is all business and much more worried about themselves and getting to wherever they're going first - especially before me. I'm sure much of that has to do with the 'tude I mentioned before.

The Valley also has many very good schools and is a great place to raise your kids. It's also a great place to spend some time, eat a good meal, have a drink with friends, shop, see how movies and TV shows are made and generally live your life in relative peace and harmony. Is it perfect? No. But really, is any place perfect? I will also say that I have not had a negative experience every time I've gone to the Westside.

I particularly like some places and things about Santa Monica such as Father's Office, The Santa Monica Pier Aquarium, the fact that the city gives free parking to Hybrid drivers and more. To me, Santa Monica has the closest thing to that "small town" feeling I've found when not in the Valley. That said, I still prefer my stretch of Ventura Blvd. and my local Valley spots like the Starbucks at Ventura and Vantage (aka the "office"), LA LA's on Ventura near Laurel Canyon and Hugo's Restaurant at Coldwater and Riverside.

I'm sure my reasons will probably anger some of you who live on the Westside. It's not my intention to anger, provoke or otherwise antagonize. These reason and feelings are mine. I'm sure many of my fellow Valley residents feel the same way but few of them have a forum in which to express their feelings. Fortunately, that's not the case with me. I have a forum and here I am, expressing away. If you don't like what I have to say, start your own company and have your own website about Los Angeles. Until then, feel free to attack me in the comments if you wish.

However, if you do go on the offensive, consider for a moment why you're doing it. Is it that my observations and statements are false or is it that they are true and hit too close to home? Either way, I'm not saying all of you who choose to dwell on the Westside are jerks with an attitude problem -- but some of you are making the rest of you look bad.

Ok, that's it. All the best for 2007 to everyone - no matter what neighborhood you live in.