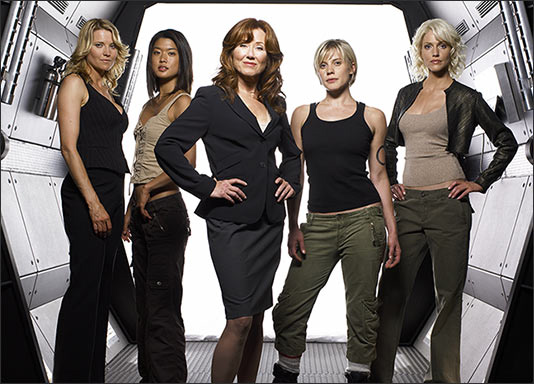 Yes folks it that time of year again when people make lists of the top whatevers that did something, didn't do something, inspired them, made them laugh, cry, sick or any number of other things.

For better or worse, I'm no different and am caught up in the whole list thing. So, I will be providing a list of my own for your enjoyment, distraction, derision or otherwise perusal.

My list is the top-ten TV shows of 2006. Some new, some old but all constitute the best of the year — at least according to me. But enough of my yapping, let’s get to the shows, shall we?

1. Battlestar Galactica - Seriously, just forget the whole "sc-fi thing" and this show is just the best drama on television that keeps getting better and better. Conflict, romance and the nature of humanity all wrapped up in grittily realistic and superbly executed package makes this show richly deserve its place at the top of my list. Watch it — you won't be sorry.

2. Veronica Mars - She's cute and sassy and can solve your case like nobody's business. Veronica Mars is a great show with a great cast on a crappy network that probably doesn't appreciate it. Plus, Kristen Bell is just as cute as a button — did I mention that?

3. The Wire – If you are not watching The Wire you don’t know what good television is. This show is brilliantly written and directed and features an ensemble cast with so much talent they make you forget you’re watching actors and instead make you think you’re watching real people. It’s just that good.

4. Heroes – At first I didn’t know what to make of this show but over the weeks its just gotten better and better. Plus, it has some very attractive cast members, including Ali Larter and jail-bait Hayden Panettiere (at least until next August), so that’s a definite plus. And, as I love all-things comic book this show works for me and it'll work for you too.

5. The Daily Show with Jon Stewart – Fake news is better than real news any day. Besides, with the state of “real” news, this show provides the only news you need. Plus it’s just about the funniest show on television. Help advance the liberal media agenda and watch this show.

6. The Shield - This is one of the rare cop shows that was able to transcend its genre and become something more. Sure, its about much of the usual cop-show stuff but its realism, writing, direction and stellar performances, especially by Michael Chiklis as the deeply troubled and conflicted Vic Mackey, make this show a compelling hour and elevate it above similar shows.

7. House – Two words — Hugh Laurie. That’s all you need to know about this show. Although, there are others in it and its very well done, its Laurie that makes the show work and excel.

Watching him hobble around, cane in hand, spewing vile and still receiving the reluctant admiration of his colleagues because he’s simply a bona-fide genius is a great time. Oh, and the rest of the cast is pretty good too.

8. The Unit - A show that mixes the creator of The Shield with the genius of David Mamet has to be good, right? Well, this show is better than good because it’s great. The show also manages to throw in quite a few life-lessons and makes you think about things like honor, commitment, loyalty and sacrifice. And did I mention that stuff blows up?

9. Studio 60 on the Sunset Strip – Say what you want about Aaron Sorkin but you can’t underestimate his genius. Sure, he sometimes takes things a little to the extreme but that’s what makes him, and this show, interesting. After a somewhat rocky start, the show has gotten better and better as the cast (and Sorkin) find their rhythm.

Plus, there are some real standouts in the cast including Amanda Peet, Steven Weber, Sarah Paulson and yes, even that guy from Friends and the other guy from The West Wing. Try to look past the sometimes in-your-face “message” and just enjoy the witty banter, moments of sheer comic brilliance and some good sketch-comedy too.

10. Men In Trees – Just to prove that I don’t just like “guy” shows I wanted to include this show on my list. Plus, its just a good show too so it was easy to put it here. It’s funny, cute and also shows what a simple premise done very well can result in – a terrific show.

It’s hard doing a show like this without going into the eventual “sappy” territory that plagued other shows like this in the past. Somehow, this show manages to avoid that trap and remain a charming diversion — which is so often needed these days.