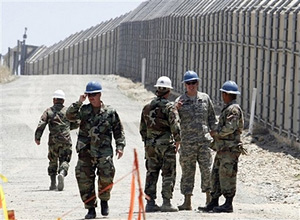 One of the firms working on the US-Mexico Border Fence has been fined $5 million for hiring illegal immigrants. This controversy was ironically predicted by comedians such as George Lopez, who jokingly says in his new act, "They want to build a fence along the border to keep out Mexicans, but who's gonna build it?" Answer: Mexicans.

The Golden State Fence Company will not only pay a major fine, but two of its executives will have to serve jail time for the hirings.

The company's attorney stated that this all goes to show that the country needs to adopt a robust guest-worker program.