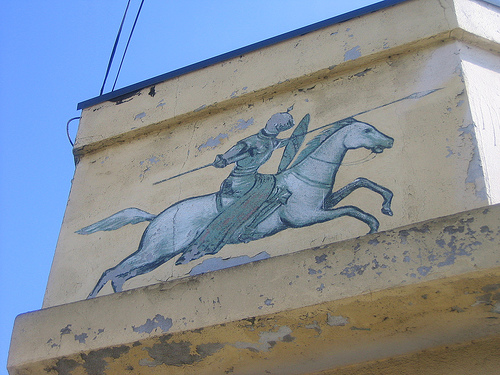 At the corner of Glendale Blvd. and Branden Street in Echo Park (or is that Silver Lake? Will we ever know?), a brave knight guards the threshold of what appears to be an abandoned storefront. There's lots of random crap behind the building, so something's definitely happening in there. There is no other signage on the building other than the knight on the transom, and the windows are either boarded up or obscured with brown paper, but Sir Peeling Paint holds his lance aloft, guarding against intruders.

What goes on in there, O Brave Knight? We may never know, but the handwritten note on the door leads us to believe that they don't deal in glasswares or Hummel figurines.