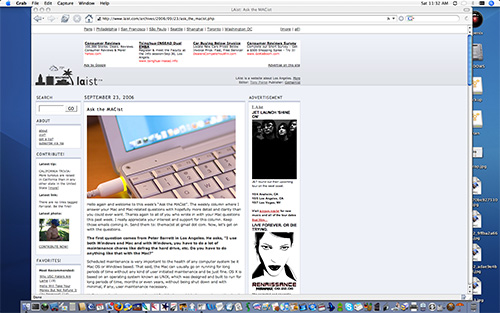 Welcome to the latest edition of “Ask the MACist”. The weekly column where I answer your Mac and Mac-related questions with hopefully more clarity and insight than you could ever need. As always, I want to thank those of you who sent in questions this week. They are much appreciated. Keep it up!

And remember, if you have a question about anything Mac or Mac-related, send it to me, The MACist, at: themacist at gmail dot com. Ok, let's get to the questions.

The first question comes from Jennifer in Studio City. She asks "I came from a PC and there were always a bunch of updates for Windows coming out all the time. Do I need to update my Mac almost every day too?"

The modern Mac computer running OSX is a very stable and secure piece of hardware. As you may or may not know, OSX is built on an operating system called Unix. Unix was designed from the beginning by computer geeks who took security and reliability very seriously. Also, Unix has been around for a long time (since the 60's) and has been tested rigorously in real-world conditions to ensure it's rock-solid. Because of this, OSX is very secure and reliable and will keep working for a long time.

However, even an operating system as good as Mac OSX has a few issues from time to time. That's why, every so often, Apple releases an update, bug fix or security update for OSX. Not nearly as often as Microsoft, which updates Windows very frequently, but still, they do it. Apple also releases what are called "incremental" updates to the core areas of OSX. These updates are also called "point releases" because they update OSX to the next point level. For example, OSX is currently know as 'Tiger" and also know as OSX 10.4.

The most recent point release of OSX is .7 so at the moment, OSX is known as 10.4.7. Soon, there will be a .8 release (yesterday, actually) and then, when updated, OSX will be known as 10.4.8. These updates are released by Apple to provide improvements to OSX and also in many cases, security and other bug fixes as well. These updates are released for good reasons and provide many improvements and refinements so every user of OSX should apply them. Eventually.

Sometimes, however, these updates can actually cause new problems while they are fixing old ones. This just happens sometimes when dealing with a complex operating system like OSX. So, while it’s a good idea to update your computer, it’s always best to wait a week or two after the update has come out before you install it. That way, you may at least get some idea if the update is causing problems or curing them.

Apple has a mechanism in place to alert users of new updates to OSX or other software from Apple. It's called 'Software Update." To configure it, go to "Software Update" located in "System Preferences." Once there, you can turn automatic update on or off and change the interval between software update attempts. The default is for automatic update to be enabled and for the computer to check once a week.

We advise users to leave automatic update on and leave it at the one week interval. But when a new update comes up (and it will) don't install it immediately. Wait a week (or two) until it comes up again and then go ahead and install it. You also have the option of downloading the update only and not installing it. Don’t do that. It’s best to just ignore the update and wait until it comes up again a week later. If you don’t install it the first time it comes up it will keep coming up every week until you do so don’t worry about missing any updates.

If you follow this practice and it turns out Apple needs to make a change or fix an update, you have a much better chance of ending up with the most current and problem-free version. So, waiting is not a bad thing it's the smart thing.

The next question comes from John in Los Angeles. He asks "I use a Mac every day but it seems to be kinda slow now. What can I do to try and speed it up?"

To speed up your computer there are a couple things you can do. But first, its a good idea to see if one of the main things that can slow down a Mac is happening on your computer. You need to check and see that your hard drive is not getting too full. To check this, go to your desktop and click once on your hard drive icon. Then, go to the "File" menu and select "Get Info". A window will pop up and give you some information about your hard drive.

Among this info will be an area telling you how much space you have left. The number we are most concerned with is the number next to "Available." If that number is below 5 GB you might have a problem. Because OSX uses a portion of the hard drive for what is know as a "swap file" it needs a portion of the hard drive to be free all the time. This file is mostly used when OSX needs more physical memory (aka Ram) than the computer has to offer.

If the physical Ram of the computer is being used by other applications, such as when you have several things running at once, then OSX needs to go to the "swap file" in order to continue to function. As your hard drive gets fuller, this file gets smaller until finally, if your hard drive is very full, OSX can slow to a crawl or even stop working completely.

So believe me, a completely full hard drive is not something you want to have. A good guideline as to how much space you need is to have a least 10% of the hard drive free at all times. So, if your hard drive is 80GB in size, you will want at least 8GB free for optimal efficiency and to help prevent data loss.

That bring us to the best and least expensive thing you can do to speed up your Mac (or your PC for that matter). Buy more physical memory. Most Macs sold these days come with 512MB of Ram memory. While that may be ok for most casual users, it really isn't enough once you have a few applications running or try to do anything serious.

So, we always advocate that any user max out the memory in their computer. So, if you get a MacBook, for example, put 2GB of Ram into it (the most it can handle) and your user experience will be greatly improved. Remember: more Ram memory = faster computer.

When putting memory into your Mac you have a lot of choices where to buy it. Keep in mind that the Mac is a precision piece of hardware and as such has rather strict requirements when it comes to memory. So much so that in some cases, memory that is purchased from a "bargain" source will not work at all or will cause the computer to behave erratically.

That's why we only use one kind of memory in all of our personal Macs and our company, The Mac Authority, only recommends one kind of memory to clients: Crucial. We have never had a problem with memory from Crucial and we have installed it in hundreds of Macs. It might be a little more expensive than other kinds but in the long run it will pay for itself with improved performance and hassle-free use.

About Chris Ullrich (aka the MACist): Chris is a frequent contributor to LAist as well as other publications and also tweaks Macs (and PCs) for clients in the Entertainment Industry.

All logos, product names, etc. are copyright or trademark of their respecive owners.