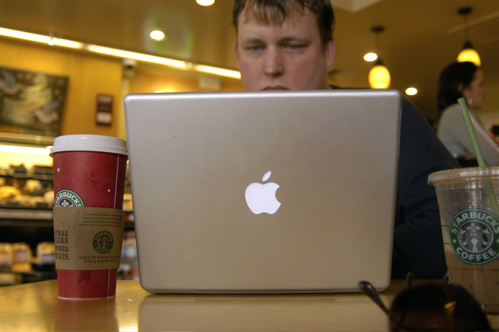 LAist likes to focus on various neighborhoods that make up our great city and some of the features of those neighborhoods that make them stand out. This time around our focus is Studio City. Some of you may be thinking "Studio City? That's the valley, nobody goes to the valley." Well friends, you're wrong. Many people go to the Valley and to Studio City in particular. In fact, Studio City is home to many important places that if they didn't exist, could greatly effect your life and the lives of those closest to you.

One of those places may, on the surface, look like any other corporate coffee store that can be found on almost any corner of these United States. We're talking, of course, about Starbucks. Specifically, the one located at the corner of Vantage Ave. and Ventura Blvd. This Starbucks is rather unique in many ways. Chief among them is its proximity to one of the major TV production hubs in Los Angeles, CBS Radford. Pick a TV show either on the air now or coming soon, and it's probably been filmed or will be filmed, at least in part, at CBS Radford. Plus, many classic TV shows and films were made there. It's got quite a history.

The fact that this Starbucks is so close to CBS Radford means that many of the writers, producers, stars, directors and even a few grips go to there to work, hang out and get a cup of coffee or some sort of fruity Frappuccino. This Starbucks serves a very important function to the creative community that makes its home in and around CBS Radford. It helps them to be creative and to make the TV shows and the films that people can enjoy. Without it, what would the cast and crew of "Passions" do when they need a boost to make it through the day? We don't even want to think about it.

In fact, many locals often refer to this particular Starbucks as the "creative nexus of Studio City". So, the next time you drive through Studio City in a hurry to get back to the Westside, take a minute and stop at the Starbucks at Vantage and Ventura. Go in and buy a busy writer a cup of coffee. They will really appreciate it. How can you tell who the writers are? They're the ones with the laptops, talking to the person next to them instead of working.