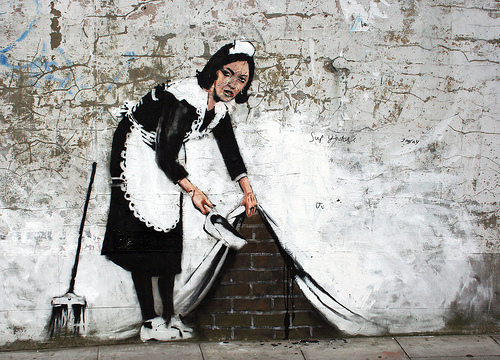 No one knows where he will strike but prolific stencil graffiti artist Banksy (aka Robert Banks) from Bristol, England, will make a much anticipated ”Barely Legal” L.A. appearance (or at least his work will) on September 15-17 at a super secret location that won’t be disclosed until the day of the event. - Caroline on Crack

we have a date for the first opening of H&M in SoCal: September 21st in pasadena located at 60 W. Colorado Blvd. Beverly Center and Westfield Santa Anita to follow later this year with no set dates. - terra non firma

Because we caught the full 90 minutes of Prince, we never made it to any other of the Emmy events. - Franklin Avenue

I watched 9/11 this weekend and the whole movie was ruined because of Nick Cage’s crusty lips. - xTx

Richard L. Armitage, a former deputy secretary of state, has acknowledged that he was the person whose conversation with a columnist in 2003 prompted a long, politically laden criminal investigation in what became known as the C.I.A. leak case, a lawyer involved in the case said on Tuesday. - NY Times

In The Lost Girls, an oversized, pricey ($75) and very graphic novel, Moore and artist Melinda Gebbie (his fiancée) imagine the X-rated escapades of three of the world's most beloved storybook heroines: Wendy from Peter Pan, Dorothy from The Wizard of Oz and Lewis Carroll's Alice. - USA Today

If you'll recall, her insurance company said having sex with multiple partners in multiple orifices, that's OK. But playing football is too dangerous. - Fishbowl LA

Pet owners in unincorporated areas of Los Angeles County have an additional six months to get their dogs neutered and microchipped after a vote Tuesday by the Board of Supervisors. - LA Daily News