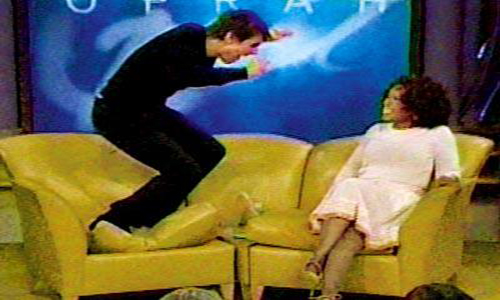 Paramount Pictures announced this week that they are ending their 14-year relationship with Tom Cruise and his Cruise/Wagner production company. The relationship between Cruise's production company and Paramount disintegrated into name-calling after Sumner Redstone, chairman of Paramount parent company Viacom Inc., said Cruise's recent behavior, such as jumping on Oprah Winfrey's couch and pushing his Scientology agenda, was "creative suicide." Redstone said such displays cost his studio up to $150 million in lost ticket sales for Cruise's last film, "Mission: Impossible III."

The split for Cruise and Paramount comes at a time when studios are slashing costs, especially the kind of huge paychecks that stars such as Cruise get, even for production deals. Paramount was reportedly paying his company, Cruise/Wagner Productions, $10 million a year to develop new projects even if none of those projects were ever made. Not a bad deal. Where do we sign up?

Studios, seeing profits shrink as box-office goes down and DVD sales decline, are trying to dump the long-held economic system in Hollywood that led to deals like the one Paramount had with Cruise. They are also trying to reign in the huge salaries such stars command. They hope the days of the $20 Million per movie paycheck for certain stars will come to an end. Although, that may be just wishful thinking. Stars still but get people out of the house and into the theater.

What will the split from Paramount mean for Tom Cruise or his popularity? Not much, probably. Tom Cruise has enjoyed popularity and success longer than most actors given the sometimes fickle nature of the audience. He will probably bounce back from this and get an even sweeter deal somewhere else. Plus, his company still has several projects in development with Paramount and many will end up getting made even without his deal with the studio.

Or, as his partner, Producer Paula Wagner, commented, they will get their own money and make their own films outside of the studio system. Besides, Tom Cruise is just weird and acts weird in public sometimes. It's not like he got drunk, arrested for DUI and then went on a racist and anti-Semitic tirade. Tom, we forgive you for being weird. You can be our wingman any time.