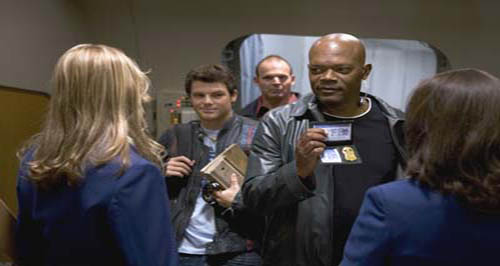 What could have happened? The movie had probably the best buzz and internet hype of any movie so far this year. The anticipation level seemed so high that people should have rushed out and go see the movie the moment it opened. Unfortunately for "Snakes on a Plane" the magic sort of fizzled. And that, as they say, is that. The opening weekend gone with not that much to show for it.

So, what happened? Why did “Snakes on a Plane” only make about 15 Million Dollars instead of the estimated 30 to 40 Million it was supposed to make? Was the movie a victim or its own hype? Or, did the hype machine just peek too soon and by the time the film opened, people were sick of hearing about those "motherfu***ng snakes"? The L.A. Times thinks so.

The answer might be as simple as this. No matter how much you polish a turd, its still a turd. That's an old saying we learned during our days in the "bizz". We’re not saying the movie was really bad, it just wasn't really good. Even if a movie has all the hype in the world you can only fool some of the people some of the time. People need a really compelling reason to get off of their asses and go to a movie theater these days. The rest are going to wait for the "Snakes on a Plane" DVD, which should be arriving shortly.