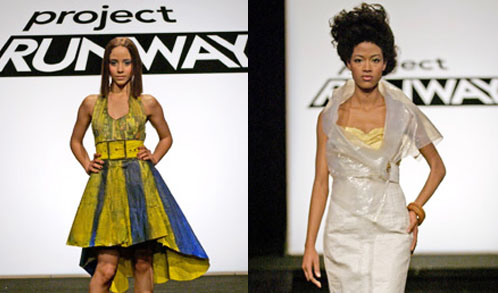 In this dramatic episode, the remaining contestants were taken to a New Jersey recycling plant (since NY dumps all of its garbage in Jersey, it made total sense) and were told they were to make an outfit out of the reusables in ONE day — a task that could prove daunting if you’re not innovative enough. High, high stress.

This really wasn’t one of my favorite episodes. It’s not fun to watch an overblown craft fair gone fashion. Realistically speaking, you’re never going to see women walking the streets wearing found materials — found right out of their waste baskets and recycling receptacles. And you know the judges are going to be judging the looks from a “how-wearable-is-this” perspective, so right from the start you have a challenge farfetched and angled so that low scorers are at a total disadvantage.

Kayne painted a lime green flower onto a peanut sack and then glued bottle caps all over it. What the hell? Tim Gunn called it a bad "high school craft project". I think he was being overly tactful. Even Kayne acknowledged the colossal Ugly level of his creation by saying the judges would have to smoke crack to give it high marks. Why, then, would you design something that looks like it came out of a frog’s butt? Kayne had to scrap the skirt and re-craft it out of homemade papier maché. It ended up looking like an exploding toadstool piñata. Not far from frog ass. Kors: "It’s over the boundary of taste." Yeah. Word.

Allison, a traditionally high scorer, was having a hard time in particular with this challenge. Which is sad, because up to this point she was THE reason (besides Michael Knight) I watched the show. I have been rooting for her since day one. Her look: ruffled cream paper with a paneled bustier thingy and a semi-obi-ish belt-thing. Then she stuck a faux-hair Minnie Mouse bow on top of the model’s head, and -- voîla! Instant Ugly (uglier). Not expected of Allison at all. In fact, actually, it’s downright disappointing! I expected way more from her! She can do funky chic and elegant lines. Her outfit was incredibly bad.

Detroit Neck (Jeffrey) used news and magazine paper to make a flowing frock spray painted yellow and blue with a drawn-on belt. The only movable piece on the runway. Kors: “You have a thing with Ugly Beautiful.” It’s funny that fashion creates concepts out of oxymorons.

Vincent: a paper sheath gown glued with trash items. It looked like a paper shredder had vomited onto it. The hem hit the model’s ankles; she couldn’t walk in it. He exclaimed in his Woody Allen voice, z'I just LOVE it." Ok, but the judges didn’t. They called him "insane". Michael took home the immunity for his gold Mylar bustier and peanut-sack pencil skirt with plastic wrap shrug. I was proud for my boy. He’s clever, he thinks about his outfits down to the materials and what they could stand for. It’s intelligent. And to see a minority designer (who is straight!) get so far in this show makes me proud to be brown.

Allison went home amid tears. The contestants were yelling at each other, venting their frustration at her unfashionable exit. I almost cried. Apart from Michael, there really is little to look forward to on the show. She was my highlight. Ok, I lied. I did cry a little.

Next week: the feud between Jeffrey and Angela worsens and Architect is getting on everyone’s nerves. "Design for the Everyday Woman." Hmm. What is that supposed to mean? 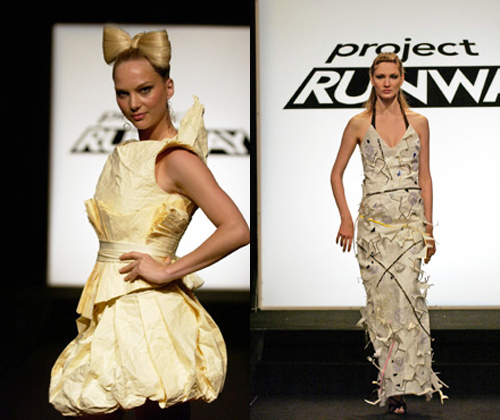