Comic Con - The times they are a changin' 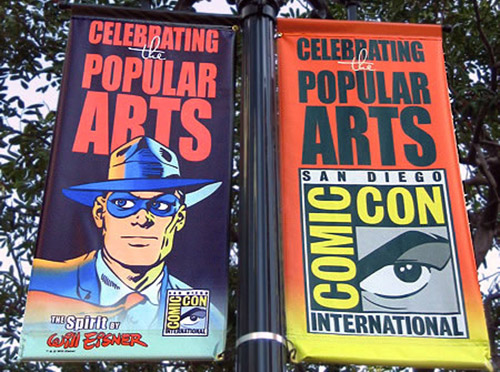 LAist loves it some comic books (and movies and TV shows and girls in costumes) so we, naturally, went to the San Diego Comic Con this year. Yes, as we've said before (many times), San Diego is not LA. Really, no place is LA. LA is the only LA. We know it and you know it. You just have to let that one go. Besides, that’s where the con is so that’s where we went.

For us, the Comic Con proved to be very interesting indeed. We were able to satisfy all of our various personalities as both fan and objective reporter. We managed to snag copies of the comic books and graphic novels we wanted as well as talk to various Comic Con "celebrities" and even some that don’t need quotes too. The show floor was even more crowded than last year and was a hot, sweaty teeming mass of humanity where some people really needed to shower more often. At points, it was almost impossible to pass through the crowd on the floor and if one more person bumped into us without saying anything we might have had to use our superpowers and make their head explode.

But, we digress. The Comic Con was, and is, many things to many people. For some, its a comic book convention where people can buy and sell their golden age and silver age comics and reminisce about the "good old days" of comics before all these "Hollywood" types decided to screw it all up. Or, you have the kids getting their first glimpse of a superhero character and realizing that they are cooler "in person" than in the comics. Or, the movie fans clamoring for their first glimpse of Bryan Singer, Rosario Dawson or Samuel L. Jackson and hoping for a chance to worship at the alter of Kevin Smith, hero to comic lovers everywhere.

And you have, of course, the super fan who always come in costume and stay in character no matter what or who is around them. And no matter if they really should be wearing spandex or not. At Comic Con, everyone looks great in tight outfits, even if they really don't. These fans don't care. They love the character they become and when they go to the convention, they become that character. They are Batman or a Jedi Knight or a Stormtrooper or The Joker all day and you can take as many pictures as you want. They love it and so do the rest of the people there. It's really all about the love at the Comic Con. Love of comics, movies, TV and everything in between.

Now, of course, Comic Con has entered into a new phase. The Hollywood phase. Comic book characters have always been ripe for adaptation into movies or TV shows but it has only been relatively recently that Hollywood has moved out of its ivory towers and made the trip, en masse, down South to Comic Con. Every major (and minor) movie studio, many TV networks and several video game publishers were in attendance. All were showcasing their newest and greatest and all were also looking for the "next big thing". This year, Comic Con looked more like the E3 or the NAB show than a comic book convention.

We spoke to many attendees and the consensus was that Hollywood is, at best, a tolerated presence. Granted, they loved that their favorite characters were being given the big or small screen treatment. However, they felt that Hollywood would most likely "screw it up" and make more films like "Daredevil". Most of the people we spoke to commented that Hollywood had basically run out of good ideas of its own and was now desperate to "feed the machine" by looking anywhere for new blood and new ideas. Comic Con, they felt, was a great place to find those ideas as long as they were done "right".

Of course, as we were told by a certain studio exec that wanted to stay in the shadows for fear of a public lynching by rabid fanboys "you can't please everyone" and comic books will continue to be a "source of great stories" for Hollywood. So, no matter what, you can look forward to more movies and TV shows based on your favorite or not so favorite comic book characters. And with several hundred comic books and graphic novels coming out every month, Hollywood may have really found a fertile ground for new concepts and new ideas.

What they do with those new concepts and new ideas and will they somehow loose something in the translation to the big screen is anyone's guess. That's the magic and the curse of making popular entertainment. You are never really quite sure if what you've got is good enough to be a hit. Our guess is that there will be some hits and some misses, like always. Because its true, you can't please everyone.

The final question on many people's minds as they left the con this year and headed home was one simple thing. How can the San Diego convention center handle all the people and will the con, for the first time in its history, be a victim of its own success and have to move out of San Diego because the convention center cannot handle the size of the crowds?

Rumors were all around that the con would move to another venue and another town, like Anaheim or even LA. But for the moment, we were assured that for 2007 at least, the con will stay in San Diego. After that, said one comic con official who also wished to remain unknown, all bets are off.

For more on the deals, intimate details and all the dirt on the Comic Con, check out comic book resources. These local LA guys do a great job covering the comics world in all its glorious detail.