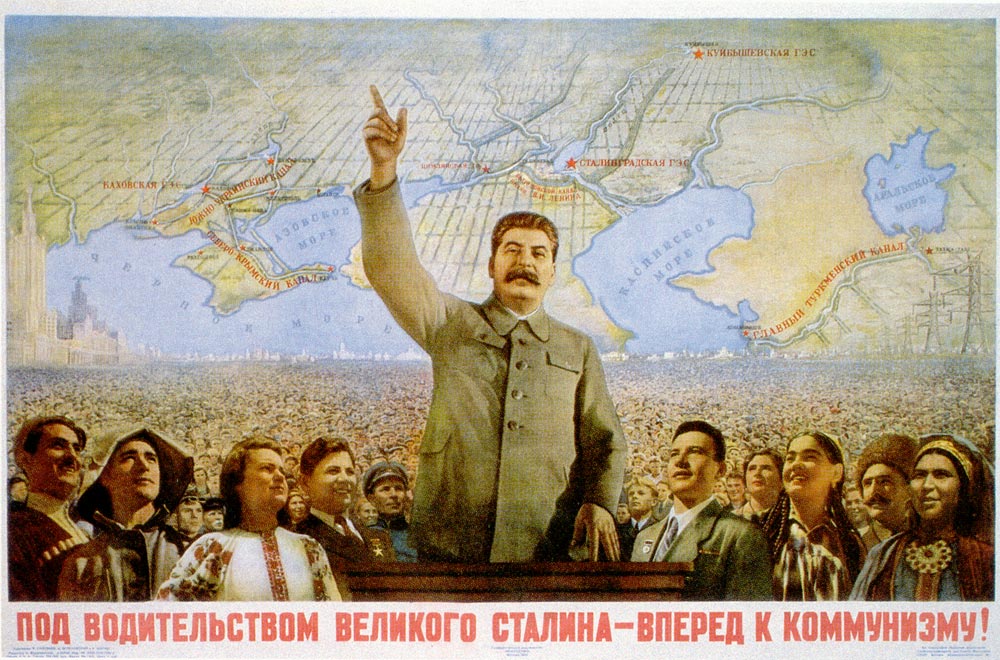 No more Stalin...you only have two nights left to see a group of earnest actors gyrating under a dirty bedsheet, and singing "U....topia!" like Animal Farm. We pointed to this revival production two days ago, but we saw it last night, and, God, is HOW TO EXPLAIN THE HISTORY OF COMMUNISM TO MENTAL PATIENTS the scariest story on Santa Monica Boulevard.

In an fiercely pro-Stalinist mental hospital,
with the dictator's portrait overshadowing the stage like a glowing lightbulb,
somewhere in the former USSR -
the esteemed Soviet realist writer Yuri Petrovski (Jeremy Lawrence) has been assigned to, yes, explain communism to the mentally ill. And he has just the metaphor to do it:

"In order to build a country where no one gets shit dumped on them again, we have to get rid of all the people who aren't willing to see things through."

The self-aware Yuri writes a chapters of Communist history every night, reliving his own horrors and his country's past.

He is interrupted by members of the staff: vicious, drunken Stepanida Rozanova (Melanie Chapman) who believes that the patients are harboring counterrevolutionaries, to the Stalin-stalker Katia Ezova (Hannah Dalton) who wants to fuck him because he touched Stalin's hand.

And every morning, he reads from his writings like a priest to the lightly, moderately, and severely mentally debilitated. Taking questions from the bound and gagged, sleeping with the nurse, and visiting the inmates later and later at night, Yuri has a hard time drawing boundaries between the insane patients and his fellow Communist party members.

When Stalin dies, the entire hospital is thrown into turmoil. The final image of the play gives no doubt that the entire nation, all who have placed their faith in the dictator, are crazier than the inmates. Those who forget the past, et cetera, et cetera.