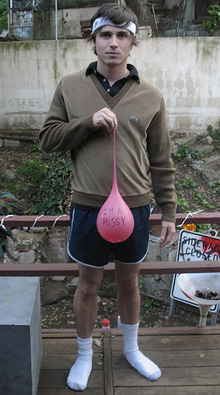 Our "20 Under 30" interview series with the coolest Angelenos under 30 focuses its bleary-eyed stare on the inexhaustible Chris Cruse of Echo Park. He's got a fantastic day job working on visual effects for "CSI:NY" (think bullets whizzing into bodies) but that's just the beginning. He also made a music video for Xiu Xiu, can be found DJing and/or running the projectors with his roommate at parties around town (currently they're at LiT at Memphis) and once had an indie record label. Did we mention he's just 23? Meet Chris Cruse, eastsider extraordinaire.

What's the strangest/grossest effect you've ever created for "CSI:NY?"
Strange and gross is pretty par for the course, like making wounds bloodier or adding flies encircling decomposing corpses. A favorite shot for the writers is to push zoom into the body and see exactly how a weapon kills the person inside. So for a recent episode, Mac formulates an idea about how a bullet pierces the victim's body, nicks the heart, exits the body, and causes him to bleed to death. To accomplish that idea our team worked with the Makeup Special FX department to build a model of a heart that would allow us to do all sorts of gross stuff to it. The 2nd unit shot many takes, each consisting of different parts of the shot. One pass was the bullet, pulled through the model by a string, "nicking" the heart and exiting; another was meat chunks flying out of the heart; another a gaping hole spouting waterfalls of blood. My job was to composite all these shots together so it looked like one shot.

What advice would you give to someone who wants to work in visual effects?
Don't tell anyone that's what you want to do. Keep it a secret.

Um…my boss got his start doing graphics for trailers. You know, the exciting titles that fly at you. I'd assume it would be a good idea to know 2d animation and 3d modeling and compositing programs. That's a lot to know, so some people specialize — especially if they're going to work for a big company like Digital Domain or ILM.

We're kind of an experiment at "CSI:NY." Normally, visual effects in television are farmed out to a larger company. We are three individuals who have more or less become an in-house effects company, doing all of the effects for the show. We all have a broad background, but we cater specifically to what the show needs. I can really only speculate on how to get to this unique job situation — it's definitely not the norm.

You work in visual effects, but you also DJ and have made a music video. Which do you like more, visuals or audio?
When you giggle because they synch up that well.

You were music supervisor for a movie playing in Cannes. Which one? Did any LA bands make it in?
It was in the market, not in competition at Cannes. It's a thriller called The American Standard. A few LA bands made it in. There wasn't enough money to attract everyone we wanted, but it's great exposure for the ones who were cool not getting a ton of money for it.

What's the greatest live music show you've seen in LA?
The greatest in recent memory was !!! at the El Rey. That was an incredibly nasty dance party...the entire place got down way beyond typical too-cool head nodding. Nic Offer announced that LA was officially the craziest city they'd ever played...besides Barcelona. I admit I felt a tinge of pride, mixed with blood from my forehead.

What is/are your favorite book(s)/CD(s)/movie(s)/TV show(s) about LA?
Books: Less Than Zero, Play it as it Lays, The Day of the Locust

Movies: Barton Fink, The Wizard starring Fred Savage, To Live and Die in LA, Star 80. (Is there a pattern of narrative here? Coming to the city that feeds your dreams and simultaneously consumes them? Leaves shells of humans behind? I don't know why I like that story so much — it's too nicely packaged to be true.)

CDs (they aren't all about LA, but come on): "Forever Changes," "Pet Sounds," "The Predator," "Either/Or," "Echodelic Sounds of Future Pigeon," "The Unseen."

What is the "center" of LA to you?
Are you kidding? The freeways probably. They're the only place in LA you really see "everyone." So where the 5 and the 110 and the 101 and the 10 all kinda come together.

It's 9:30pm on a Thursday. Where are you, and where are you going?
I am on a stepladder with a scraper and soapy water, trying to put a dent in Shepherd Fairey's posse patrol. But shortly thereafter, I'll be on my way to a bar near where I live, realize I have to wait in line because Heather Graham had her birthday party there once, and then I'll bail and go back home and watch TV on DVD.

If you could make one thing be different in LA for your 30th birthday, what would you change?
Put a monorail throughout the city with Ray Bradbury as the conductor. He has to wear the hat though.

Where do you want to be when the Big One hits?
With Dionne Warwick and George Clinton in a helicopter taking pictures of earth from above with Yann Arthus Bertrand. Or doing the splits at Faultline. Whatever's funniest.