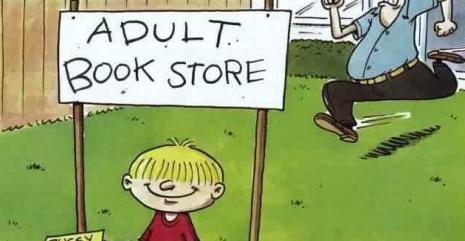 This column is the first in a series of articles on important Supreme Court cases that have developed out of events in Los Angeles. "Stare Decisis" is the guiding principle of the American legal system - the court should "let the decision stand" and respect precedent for the sake of the rule of law. Even though it is known for shaping American pop culture, Los Angeles has shaped American legal culture in more ways than we may like to admit.

Pornography law, much like pornography itself, would be nowhere without the movies. The People vs. Larry Flynt, for example, made a martyr out of the smut magnate while educating the country on the limits of the First Amendment. More importantly, though, the Supreme Court's decisions about obscenity have developed out of cases brought by or against adult video stores. It's only fitting that the most notable recent decision in this field came from silicone city itself.

The Supreme Court decision in City of Los Angeles v. Alameda Books is a bit of a mess. Under the guiding decision, City of Renton v. Playtime Theatres, cities are allowed to regulate only the "secondary effects" of adult theatres and bookstores, not the content of what they sell. Cities proceeded to justify their anti-porn laws by pointing to the crime and economic consequences associated with red light districts. Renton also gave the Court cover - it could vindicate populist sentiment without explicitly eviscerating the First Amendment. When it comes to sex, nobody, not even the nine bodies on the Supreme Court, is totally free of denial.

Following Renton, Los Angeles had backed up Ordinance #1, zoning for the dispersal of adult stores, with a 1977 study proving that high concentrations of adult entertainment businesses correlated to "higher rates of prostitution, robbery, assaults, and thefts in surrounding communities." Alameda Books argued that this study, potentially no longer even relevant in 1995, could not be used to justify Ordinance #2, prohibiting adult stores from siting within the same building.

Come 2002, seven years later, the Supreme Court issued its plurality opinion in the case, written by Justice Sandra Day O'Connor. The opinion is a template of the classic O'Connor two-step: first, it tosses the strict rule out, and then it substitutes a balancing test in its place. Because the regulation regulated only effects, and not content, it was therefore "content-neutral" and did not require the "strict scrutiny" applied to content-based regulations. The city could "reasonably rely" on the study's findings in fashioning its ordinances. Applying so-called "intermediate scrutiny" instead, O'Connor explained, and to some extent reconciled the central difficulty of the case:

Our deference to the evidence presented by the city of Los Angeles is the product of a careful balance between competing interests. One the one hand, we have an "obligation to exercise independent judgment when First Amendment rights are implicated." On the other hand, we must acknowledge that the Los Angeles City Council is in a better position than the Judiciary to gather and evaluate data on local problems. We are also guided by the fact that Renton requires that municipal ordinances receive only intermediate scrutiny if they are content neutral. There is less reason to be concerned that municipalities will use these ordinances to discriminate against unpopular speech.

The real punch of Alameda Books, though, comes from Justice Kennedy's concurrence, which decided the case 5-4. Kennedy agreed that intermediate scrutiny was in order, and that the court had reached the right result. He noted archly, however, that the plurality had fudged the definition of "content-neutral." It hadn't even considered where all that "speech," in the form of sexploitation, would go if regulated. To remain loyal to the First Amendment, the Court's duty was to consider whether the ordinance could reduce secondary effects "without substantially reducing speech." Only then could it fairly be called content-neutral.

Courts across the country have seized upon the different vectors in the opinion - some, favoring the O'Connor opinion, have found it easier to uphold city regulations. Others, taking the hint from Kennedy, have required trial courts to take a harder look at the city's justifications (for discsussions of specific cases, go here).