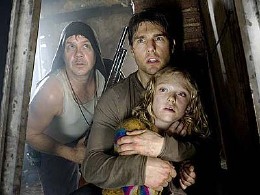 First, we are not accusing anyone of anything. It would really be hard to believe. Please, we are just a little website with some moxy and often clever writing and insight. The Los Angeles Times has hundreds of reporters, many devoted to entertainment. Maybe it’s just that the problem is out there so everyone is getting into the act and taking notice. After all, this is Los Angeles. And Los Angeles is a company town, like it or not.

What are we talking about? A story in the paper today which talks about the slump in box office for films in the USA and worldwide. The article blames the slump, in large part, on the poor quality product coming out of Hollywood. Too many sequels and other junk. Sounds familiar. Are we the first to say that most Hollywood films are not very good, especially lately? No. Have we been saying it recently and quite a bit? Yep. Does that mean the LA Times is reading LAist? Who knows?

Let's just say that the Los Angeles Times is a great paper and cares about a business which employs thousands of people here in LA. We care about the business too. We want to see it succeed because many of our friends and family make their livings in it, put food on the table because of it and have a great time while doing it.

Let's all push harder for theater owners to keep people from talking on cell phones during movies and for ticket prices to drop a little. Let's ask that something be done about otherwise nice people who for some reason think that bringing a baby to an R-Rated horror film on a Friday night is a good idea and then wonder why the kid is crying. And, let's ask for the people that have to have the movie explained to them, loudly, during the show, to just stay home and watch TV where they can talk all they want.

But most of all, let's push for some better movies. Maybe Hollywood could try thinking less in terms of how to sell a movie but instead, try to think about how to make a movie. And make it better. That way, they might find the slup over and people returning to their seats. We think the Los Angeles Times would agree.