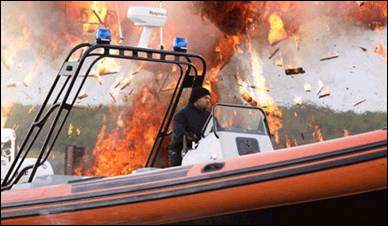 Recently, a poll from The Associated Press and AOL News was released which reveals that a large majority of people, 73 percent, prefer to watch movies at home on DVD, VHS or pay-per-view. The same poll found that only 22 per cent of people preferred to see movies the way we like to see them: in a movie theatre.

The poll results seem to suggest at least one reason for the prolonged box-office slump this year. So far, box office has been off for the past 16 weekends, compared with the same weekends in 2004. Not so good if you are a theater owner or a major studio.

Other interesting bits revealed in this poll include:

47 percent of people feel that movies are getting worse, not better. 69 percent feel that movie "stars" are a negative role model for children. And, only 5 percent (you know who you are) say that they have downloaded a movie from the interent.

The poll also shows that people who watch movies on DVD at home are actually more likely to go to a theater to watch a movie. So perhaps it isn't the sales of DVD players and the proliferation of home theaters that are causing the slump? What all of this means in the real world is up to debate. Polls are interesting but data can be interpreted in many ways.

We still believe that the best way to experience a movie is in a theater but we also understand that this isn't for everyone. We tend to believe that if the movies were better and if the theater owners took more care to silence people with cell phones and maybe try dropping the price of popcorn, they might see more people coming in.

The main problem, as always, is the quality of the product. Soon, Hollywood may realize that the same old thing just isn't cutting it anymore. If the quality of movies were to improve, we bet people would start to come back. We only hope Hollywood figures out something is wrong before its too late. Maybe polls like this will help. Probably not.