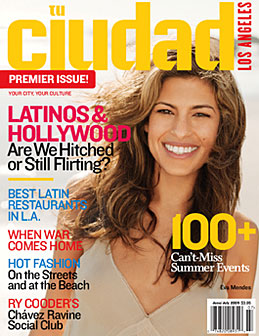 Last night we attended the launch party for Tu Ciudad Los Angeles, a new lifestyle magazine targeted at 30-something, upscale Hispanics with above average household incomes. The party was held at the historic and plush Hollywood Roosevelt Hotel with great music by Go Betty Go and Los Amigos Invisibles. Plus, an open bar, which we feel is always a good idea at events like this.

Tu Ciudad is published by Emmis Communications, which also publishes Los Angeles magazine, along with independent publishers/founders Jamie Gamboa and Gabriel Grimalt. The launch party and the first issue of the bi-monthly attracted strong support from sponsors and advertisers including GM's Hummer, Wells Fargo, Aveda, Target, Chrysler, Johnnie Walker and the Getty Center. We even got to take a look at the new H3 mid-size Hummer. It was pretty cool.

Coming out this month, the magazine premier issue's cover story, "Latinos & Hollywood: Are We Hitched or Still Flirting," explores the growing influence of Hispanic stars in Tinseltown. Eva Mendes is featured on the cover. Other stories will include a summer guide to L.A. hot spots, fashion and style, soldiers returning home and a Latin-American dining guide on the back page called "Because Man Does Not Live by Beans Alone," featuring 15 sushi restaurants in Los Angeles.

Tu Ciudad looks to be a glossy and interesting take on Los Angels from a perspective not often covered in more "mainstream" publications. With such a large Hispanic population, Los Angeles seems like the perfect place for this type of magazine. Really, if it can't work here, where can it?