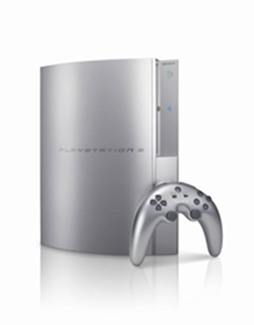 Every year the biggest names in video games, video game related and other forms of "electronic entertainment" gather in our fair city at the convention center to showcase the latest and greatest drool-worthy stuff for the gamer in your life. Or, let's face it, for you. Yes, it's e3 time again.

Even though the show doesn't "officially" start until tomorrow, there are already a few companies, like Sony, eager to get the jump on the hype. Because reallly, that's what this convention is all about. Generating hype and buzz for your product, so much so that when it's released, people can't wait to buy it.

With that in mind, Sony announced its next generation Playstation console, cleverly named the PS3, which has some interesting new features, including its new and very powerful processors, that had a crowd of over 2000 watch, mesmerized by its stunning new graphics performance.

One of the processors contributing to this new level of performance is a chip called Cell. The chip is based on IBM's PowerPC architecture and will have seven cores, each running at 3.2GHz, to give the chip a total performance of 218GFlops (floating point operations per second). In case you were wondering, that's a lot.

Running alongside the Cell is a graphics processor developed by Nvidia Corp. that is capable of handling full high-definition video images and boasts performance of 1.8TFlops. Together, the two chips will give the PlayStation 3 a total system performance of 2TFlops, or about double that claimed by Microsoft for the Xbox 360.

What does all this geek-speak mean to you? It means you will have at least two great choices for your console gaming pleasure. The Xbox 360, as featured earlier here at LAist and now the Sony PS3. Sony expects to ship the PS3 sometime in 2006 so you have a little time to save your money for it.

Other announcements and news from e3 include Nintendo, not to be left out, announcing their next generation console, called the Revolution. According to Nintendo, the Revolution will be two to three times as powerful as its current-generation console, the GameCube. With Sony's PS3 reportedly being dozens of times more powerful than its predecessor, the PS2 and with Microsoft's XBox360 being as powerful as it is reported to be, for Nintendo, it may be a case of too little to late.

Also announced were dozens of new games such as Grand Theft Auto: Liberty Cities, Final Fantasy IX for Xbox 360 and a triple threat of Metal Gear Solid 3: Subsistence, Metal Gear Acid 2, and Metal Gear Solid 4, all for the PS3.

With so much to see and do and with e3 just getting started, we will have much more info over the next few days, including some hands-on reports from the show floor. Stay tuned.