Hail to the Chef 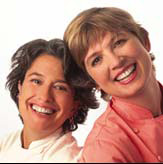 Even though the Presidential election is long over and no matter what your feelings on the outcome, one thing is for sure: The President has gotta eat. And who is in charge of what the President eats when he is kicking it in the west wing watching the latest monster truck race on TV? The White House Executive Chef, of course.

Why is this relevant, you may wonder? Well, it seems that two of our favorite local chefs, Mary Sue Milliken and Susan Feniger, of Border Grill and Ciudad fame, are in the running to become America's Next Top White House Chefs (if it were, in fact, a reality show).

Juliette Rossant, the original "celebrity chef" columnist for Forbes Magazine, started the campaign to get a woman in the job, after the post became vacant. When the job was still filled by former Executive Chef, Walter Scheib, she had the idea for a woman as a White House Guest Chef and during that poll, Mary Sue and Susan won.

Then, the Executive Chef job became available, and a new poll was born. As its very likely that this is the closest a woman is going to get to the White House for quite some time, we support a woman (or women) for the job and especially support the idea of cooking and food.