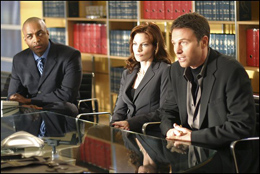 We know what you're thinking. "Oh great, another private eye show . . yeeehaaww! And with that guy from Wings too, yippee!" Well, perhaps you didn't use the "yeeehaaaww" or the "yippee" part. Nevertheless, we too were not very enthusiastic about Eyes when we first heard about it.

In fact, it looked like one of those shows that the networks dump somewhere in the middle of the season because they have to honor a contract or they lost a bet or something. Or, they just need something, anything, to fill up the space between commercials.

What a pleasant surprise, then, to find that this show not only doesn't suck (as it looks like it really could), but is actually a well-written, well-acted and well-directed dramatic hour. In fact, it's so good that it has already earned a place on our TiVo as a Season Pass (if you don't know what that means, we have no sympathy for you).

Eyes centers around the character of Harlan Judd, who is the owner of an elite, high-tech private detective agency that specializes in big-time cases. Harlan is played by Tim Daly of Wings fame. However, Wings was a long time ago and Tim not only looks good for a man of his age, he has turned into quite a good actor as well. He provides just the right touch of humor and arrogance that makes his character so interesting and helps drive the show.

Also very good is relative newcomer Rick Worthy, who plays Chris, Harlan's friend and one of his chief investigators. Worthy's character is even more complex and interesting and something we have not seen very much on network TV (if at all): a strong, gay black man recently released from a mental institution. We know, it sounds silly but Daly and Worthy make it work. They seem like real friends who care about each other.

As for the other characters, they are all good as well so you can choose a favorite among the gorgeous Garcelle Beauvais-Nilon as Harlan's right-hand woman; sweet and funny A.J. Langer as a trainee investigator; Laura Leighton of Melrose Place as Harlan's lawyer and potential girlfriend, and Eric Mabius and Natalie Zea as investigators who work undercover of a different kind.

Good TV shows succeed on good and likeable characters. Characters that the audience wants to watch every week. Eyes has its share of plot twists, action and sex which strikes a great balance with its sense of humor and style. We like all of those things and Eyes does them all very well. But, its the intriguing characters and their complexity that will bring us back.

Eyes airs on Wednesday nights at 10:00pm on ABC.