A Conversation With Political Blogger Ezra Klein of Pandagon 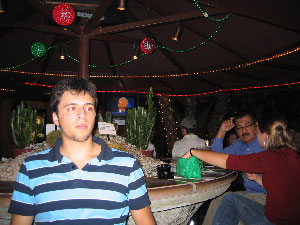 LAist talked with Ezra Klein of the political blog pandagon.net this weekend. Ezra’s been engaged and blogging this election for over a year and a half. His site, which he co-blogs along with Jesse Taylor, boasts around 25,000 hits a day. Needless to say, his voice gets heard (or his words get read). He recently transferred to UCLA from UC Santa Cruz and has much to say about politics, Los Angeles and everything in between. This guy is only 20 and had been published in the Washington Monthly and our very own LA Weekly. So listen up!

Election day is today... you've been active on the political scene for a while now... and this is your first presidential election... tell us your thoughts on this occasion. Are you relieved? What's next for you?

It's time to drink. Heavily. And it seems the rest of the onlinepolitical sphere feels similarly. It's been fascinating to watch thedrop-off as we've approached election day. Between bin-Laden, AlQaQaa, polling, barnstorming and voter fraud, there's been plenty to write about, but no one has much to say. Those who believe Bush'sbody is a mixture of sunshine and saintly intentions have exhausted all their synonyms for "magnificent". Those of us who find the president less competent than a post-keg-stand coed have stopped articulating and begun pointing. There's bin-Laden, still on the loose, on your left are missing weapons, on your right a nation lacking health insurance. The battle lines aren't just drawn, they're engraved, and with no one left to convince, there's little left to say.

Has your recent move to LA changed your approach to blogging / politics / life?

I love Los Angeles' politics. None of this pesky issue content, it's pure ethnic tribalism. Somehow, there's less artifice in that approach.

More seriously, I love Los Angeles. My Bay Area buddies couldn't comprehend why I'd leave Santa Cruz's redwood's for LA's pollutants, but that's just it. The Bay Area has a sort of liberal consensus and quality of life that leads to a towering complacency. The battles are fought with an eye towards symbolism because the stakes, insofar as San Francisco governs liberal and doesn't much affect national elections, just aren't that high. LA, conversely, has a vibrancy to it, there's a real struggle going on here. That's partially the product of our ethnic mix, partly our size, and partly our culture. In any case, it keeps me sharper, keeps me aware that the fight isn't for a good sentence or plaudits from your friends, but for real change.

What are some of your favorite LA blogs?

LAist, first and foremost. I love the concept of the blog as community space, and I'm endlessly thankful for your work in boiling down the day's cultural offerings into a post or two. The Elegant Variation is great. If I can name political blogs with writers based in LA, Digby's Hullabaloo and The Talent Show are terrific. Josh Bearman's blog for the LA Weekly is a top stop. LA.com can be entertaining, but I feel like a bad person reading it. The Advice Goddess is terrific, though I think she's in France right now. LAObserved is crucial. A Fly On The Wall is fun. I hear this blog Pandagon is pretty good...

Continue reading the special Election Interview after the jump!

LA Times, New York Times, Washington Post, neither, or all of the above...discuss the beasts of ink if you will?

All of them. LA Times has great political reporting. Ron Brownstein is the best in the business. Their op-ed page is getting better with Kinsley (though Joel Stein? I mean, what's that about?). The Post has great reporting and has been the most aggressive on the cycle's explosive stories. The Times is an institution unto itself, with the best op-ed page around. The newspapers, and, for that matter, the magazines, give a level of context and information the blogs simply can't match. Now, they also hide important facts, stuff their articles with absurd paeans to he-said/she-said objectivity, and generally waste my time. So it's a love-hate relationship.

Tell me a favorite moment of this entire election process for you.

Bush's Wolves Ad. Particularly the grave and stunned pronouncements of the press, as they considered the power of this killer blow from the Bush campaign. That was right before everyone saw the ad and began laughing at the underfed puppies who were supposed to represent al Qaeda. Also, Jon Stewart on Crossfire.

Tell me what's been great for you about living in LA since you've arrived here? From your media ventures to the culture?

There's just so much to open up to here. I've been attending a lot of readings, taking a screenwriting class, working with the LA Weekly, going out for random dinners with local writers and artists, finding the zen-like enclave of the Hammer museum, hitting up Amoeba, breakfast at Cha-Cha's (or, for that matter, Elysee) etc, etc. LA, despite its reputation as home of the shallow and the implanted, is an incredible place with ferociously intelligent, active, driven, passionate and rare people. Being able to take part in its rhythm and learn from its denizens has been more than I could ask for.

The traffic is, as you all know, killer and then some.

What kind of car do you drive?

What are you being newly exposed to here?

Smog. I've started doing more indoor workouts (the call of a racquetball is strong) to escape it.

What are some LA based political issues you're awakened to here on the ballot or otherwise?

Can't say, really. I've found that here, like in most big cities, the focus is on the national election, not the local efforts.

I used to have political aspirations, in the sense of getting my name on a ballot and promising Iowans more ethanol subsidies than they could handle. But over time, I found that I enjoy writing far more. More to the point, I think that the creation of a media environment that can sustain and propel progressivism is more important than any single elected official. I'd trade a liberal O'Reilly (or Limbaugh!) for 5, 10 congressmen. The media is as effective and important an agent for change as the legislative bodies, and I think it's where I'm happiest and most effective.

I will say, though, that the debates and forums I've been doing have been a ton of fun. Being a talking head seems like a good gig.

This might seem a strange question, but how important, really, is terrorism and this seems key considering where we live, in a major metropolis and all. Has this been a disproportionate focus of the election?

Terrorism is really important, but not because Orange County is going to face an attack (I can't help but laugh when I hear Montana's governor explaining his herculean anti terrorism efforts). The Middle East is an enormously important region, not least because of their oil, and watching their huge and growing population become radicalized against us is really cause for concern. So in that sense, the geopolitical implications are enormous.

On the domestic safety side of things, we've really got to crack down on nuclear proliferation. 9/11 was spectacular, but a dirty bomb in downtown would be deadly on a horrifying scale. That Bush has made Saddam, not Russia's loose fissile material, his top priority, is really cause for public flogging.

I should say, as a last note, that terrorism is the sort of thing we really can't afford to be wrong on. It really should be the top priority because a mistake in our preparations, fortifications or confrontations with the threat can be fatal on a huge scale.

Assuming we have a clear president tomorrow morning... any plans? Will you commence a protracted and well deserved coma?

Kerry victory: Days and days of revelry. Profound relief and a renewed confidence in the judgment and wisdom of my countrymen.

Bush victory: Depression. Loss of respect for countrymen. Fear for the direction of our country. Resolve to stay in the trenches to help handicap this radically incompetent administration.

You blog like a maniac, go to school full time, have been dabbling in assignments for the LA Weekly... where's the Ezra time? What do you do for fun?

Actually, the time consumption of these activities is easily overrated. I have an hour or two of class a day and spend most of the intervening "business hours" writing or researching my pieces. Since my work is all in politics, what I learn and do feeds nicely into my classes, vastly diminishing the amount of work I need to do for them. I'm done by 5, like everybody else. Considering how much satisfaction and enjoyment I get from my writing, I've got it pretty good, really.

We'll end on an obvious note... tell me about your best celebrity sighting.

Bill and Hillary Clinton getting into darkened SUV's, though this was in Boston. Best LA sighting? Gene Simmons and Sharon Stone hanging out in a bookstore.